Attractive two, three and four bedroom homes in a small development near this popular market town in Wiltshire

Calne is known as the ‘town of discovery’ located in the heart of Wiltshire.

Calne was once home to Samuel Taylor Coleridge – the English poet, philosopher and theologian, the scientist Joseph Priestly whose experiments reputedly led to the discovery of oxygen, and Jan Ingen Housz, a Dutch scientist and botanist who discovered photosynthesis.

Defroscia Close is a select development with three different house styles, The Grafton, Kington and Edington, providing a range of attractive two, three and four bedroom homes. Each property has its own garden for relaxing outdoor space and the development benefits from having its own children’s play area, as well green spaces and amenities nearby.

Calne is located on the edge of the North Wessex Downs, an Area of Outstanding Natural Beauty and a great example of Wiltshire’s timeless beauty. Nearby is the UNESCO World Heritage site of Avebury, including Silbury Hill and West Kennet Long Barrow and, a little further afield, iconic Stonehenge. Bowood House and gardens, home to one of Capability Brown’s most splendid parks, is also on the doorstep.

Calne provides a weekly market and various sport and leisure facilities, including a number of nature trails, cycle routes, riverside walks and nearby Penn Wood nature reserve. Hills supported the development of Penn Wood with Wiltshire Wildlife Trust by planting more than 10,000 trees on the reserve with the help of 100 volunteers. The town has a selection of independent shops and cafes, the Heritage Centre, Castlefields Canal and River Park, and the Atwell Wilson Motor Museum.

Bristol, Bath and Swindon are within commuting distance thanks to the A4 and M4 motorway whilst nearby Chippenham Station provides an excellent mainline rail service to London.

Why is the development named Defroscia Close?

The development is named Defroscia Close in memory of Tom DeFroscia, who dedicated his life to the community of Caln in Pennsylvania, USA. Caln (pronounced Callen) was founded in 1702 by settlers from Calne in Wiltshire and the towns are now twinned.

In 2019, Hills Homes welcomed the Calne and District Twinning Association and their visitors from Caln to Hills’ High Penn Park development. The visitors were shown plans and computer generated images of the houses to be built at Defroscia Close and the street name was unveiled by Patty DeFroscia in honour of her late husband, Tom.

Nick King, Group Director – Hills Homes said: “It was a pleasure to meet the members of the Calne and District Twinning Association and the residents of Caln. We are pleased to name this development after Mr DeFroscia whom during his life helped to strengthen the connection between the two towns.” 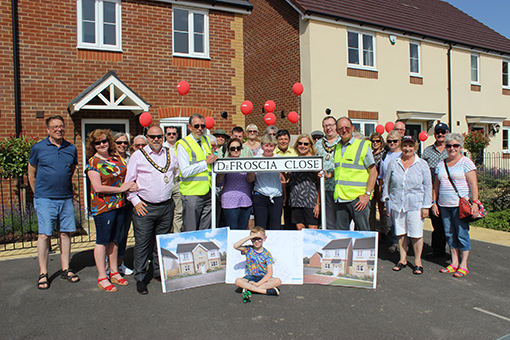 Pictured in June 2019: Patty DeFroscia in the centre joined with Nick King, Group Director Hills Homes (standing left of the street sign) with members of the Twinning Association and Caln residents. 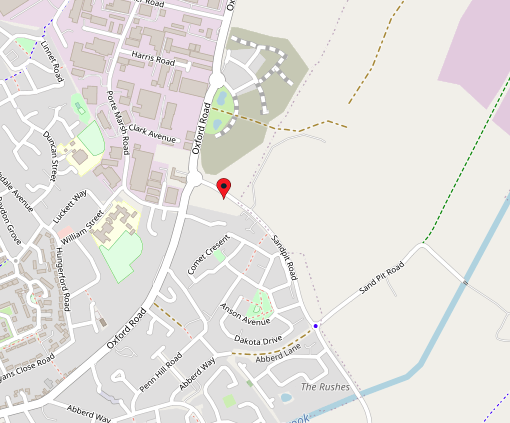 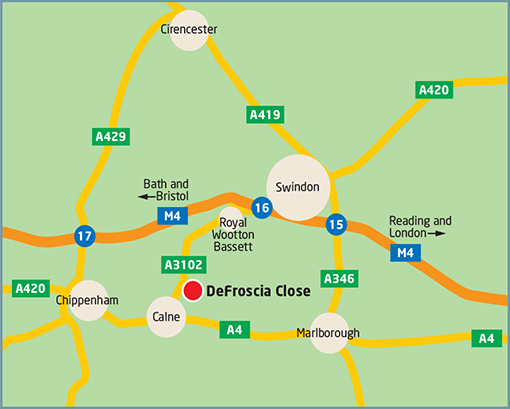 Taking a virtual walk through a Hills home

Take a virtual tour through one of our new 3D walkthroughs here.